I returned to the deforested site to consider the ways in which I could document this transposition. My approach was one of blindly feeling my way tentatively across this field of bark and broken sticks. Walking slowly on the unfamiliar ground, I began to get a sense of the rearrangement between Man and nature. Bumping gently into a tree, I used it for support as I knelt down to pick up some branches, wedging them into position between the first and second tree, an effort, no doubt, to find some purpose to this authorised desolation.

As already mentioned, I was struck by the contrast between how rarified the old brick became and the disposability of the now absent trees, so I decided to perform as an archaeologist would in order to investigate the possibilities of the site further. As well as making graphite drawings, I excavated one or two areas, careful not to disturb the soil surrounding the brick. I cleared away, dug around, and swept back the soil and foliage covering the brick fragments. 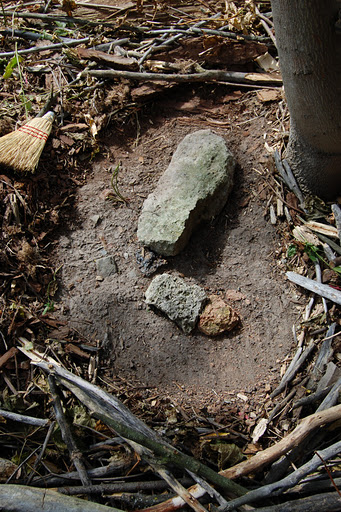